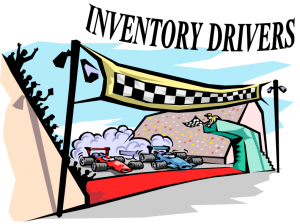 Welcome back to the ongoing series about Inventory Drivers.  In this posting I would like to touch on production accuracy.  One would think this is a given.  You take this many units of raw material and you finish with that many units of finished goods.  As talked about in an earlier posting, that is one plus one thinking and has a couple of assumptions built in that just may not be absolutely correct.

The first assumption is that the quantity completed is recorded accurately.  I’m not saying that people would deliberately misreport a number but mistakes can happen.  Depending on the product being made, it could just be a simple miscount but in other cases the process itself lends itself to less accurate counts.  Take for instance a company making something as simple as a washer.  This is not usually counted by unit but rather by weight with a particular weight assumed to represent a specific number of units.  This is arrived at by dividing the total weight by the average weight of one washer.  While this is a relatively accurate method with a lower volume, when you get to really large volumes it becomes inaccurate due to rounding error.  Specifically an average weight with 2 digits after the decimal is far less accurate than one with several digits.  Actually, anything that requires a conversion is open to severe consequences if done wrong.  If you want an example of this please go look up the “Gimli Glider”. Another possibility is that the average weight may have changed due to a process or raw material change but nobody updated the average weight used in the calculation. 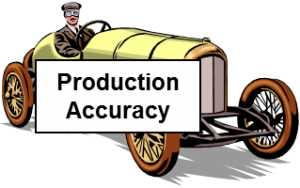 The second assumption is that the raw materials not used will be put away properly and accurately recorded.  Far too often people seem to think that once the finished goods are made that the job is done or leftovers are just pushed to the side until the next job where they might need them.  I even know of one case where parts were stripped off old machines for repairs to other machines without recording the increased inventory of the recovered parts.  Of course this led to the system showing a negative inventory because they were recording the use of parts that were never received into the system.

The important point to all this is that people must have the discipline to actually consider how their processes affect the inventory accuracy and what is needed to keep it accurate.  They also need to have the discipline to record ALL transaction and to do so in a timely fashion.  As always, real time entry being the desired time frame (RF and RFID systems are your friend).  If inventory is not being recorded correctly and in a timely fashion then inventory levels will be pushed higher as everyone tries to compensate for the inherent errors that develop.

Enjoy thinking and talking to your friends and co-workers about this, especially what it means for your organization.   I would love to hear back on your (and their) thoughts on this topic