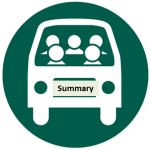 Welcome back and I hope the previous 3 posts gave you some things to think about.  I have been talking about how to apply some of the principles of Process Analysis to the commuting process.  The reason for picking that process was because most of us have at least some experience with it but mostly to show that the various Process Analysis and Supply Chain tools can be applied to any process.  It just requires a flexible mind set and an understanding of how the tools can be applied.  I have deliberately stayed at a very high level partially because most people jump right in at a very highly detailed level, partially to keep the size of each of the posts shorter and partially because this is a very complex process when you get more detailed.  In the first post I talked about the key question to start any Process Analysis with –“What, ultimately, is this process meant to accomplish?” and suggested an answer – The purpose of the commuting process is to move people and products from one point to another point as effectively as possible using the minimum of resources possible. From there we moved on to a discussion of what that answer meant which led us into an exploration (in Part 2) of some of the resources required for the commuting process.  This was then followed up (in Part 3) with a discussion of some of the tools we could use to analysis the process and surface some possible solutions or improvements.  From all this we can definitely see that the more complicated the process the more important it is to start at a high level and then progressively “peel the onion” to more and more detailed analysis.  In this case you would also need to consider the synergies and conflicts between the various competing processes within the larger Commuting process.

One last point about process analysis, sometimes, rather than making the process faster it is better to make it smaller.  In this case trying to speed up the commute or add more resources is both painful and expensive.  If we could reduce the number of people requiring this process it might be easier to make it more effective.  The trick of course is how to do that?  It may not be possible at a macro level but perhaps some progress could be made at a grass roots level.  Think of this as an exercise in culture change and perhaps some push by the government (who are ultimately in charge of the financing of commuting resources) would be helpful and cheaper than new resources.  One potential way to reduce the number of people commuting would be a growth in telecommuting.  I realize that most production facilities actually require the people to be at the plant but most big plants have already moved out of the downtown areas so they are not part of the worst commuting areas anyway.  Instead, most of the downtown organizations are service based operations such as head offices.  As a cultural issue, while the technology exists for many more people to telecommute, most companies are not prepared to allow the majority of their workers to be out of sight (and direct control).  The good news is that telecommuting does not need to just mean working from home.  The technology exists so that telecommuting just means working from some place other that the main office.  One way to keep both sides happy might be for large inner city companies could set up small satellites in surrounding communities that people could work from or meet with clients at.  This way neither of them would need to commute into the city.  Maybe they come to main office once a week on a staggered basis but most meetings would be electronic.  The advantage to the company is that they could reduce the square footage of that very expensive downtown facility and replace it with much cheaper square footage at the satellite office while still maintaining a prestigious main address.  Of course they would need to ensure that all required documentation is available electronically so it could be accessed from any of the sites but that is relatively easy to do.  The advantage to the employee is a much shorter commute, more time doing what they want rather than sitting in a car or bus every day and a better work / life balance.  The advantage to the customer is easier and faster access to people they need to visit with all the time saving that comes with that  This leads to happier customers which is also a benefit to the company.

Thank you for reading these posts.  I hope you have enjoyed this series of posts and that it has given you some new points to think about.  If you have any thoughts or questions please feel free to comment on the posts and we can see what sort of conversation we can get started on it.